Hello I'm J.R. Holmes, a Mountaineer living in Wixom, Michigan. Though I have Wolverines to the left and Spartans to the right, I will always be a MOUNTAINEER!!!!...Sound the battle cry Mountaineer Counter says you are visitor 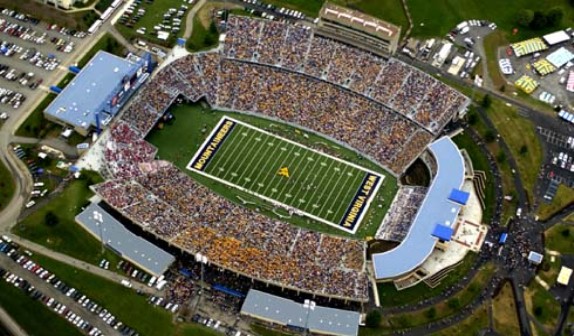 A View of Mountaineer Field from the Goodyear Blimp

Next Up: 2nd National Signing Day on Wednesday February 3rd.

Well Mountaineers Covid-19 has made it a long strange 2020 season that saw the Mountaineers have to cancel the final home game with Oklahoma but still finished with a winning record at 6-4 with the dramatic 4th quarter rally to defeat the Black Knights of Army in the Liberty Bowl. WVU coach Neal Brown joins Don Nehlen and Dana Holgorsen in winning his first ever Bowl Game as Mountaineer Head Coach.

There were some concerns about accepting the Army Black Knights as an opponent in the Liberty Bowl after the Tennessee Volunteers bowed out due to Covid-19 concerns just 10 days before the game. How would you be able to prepare to defend the Knights vaunted option rushing attack in such a short time frame. For this very reason Army despite a very impressive 9-2 season was on the outside looking in at the Bowl Season as nobody wanted to play them on such short notice, however Coach Neal Brown thought it disrespectful for an Army team sitting on a 9-2 record to be left out of the bowl season, especially with several teams with losing records competing. Even the previous WVU opponent Tennessee would have brought a 3-7 record to the Liberty Bowl had they not opted out. Thus, the game was set for the Mountaineers to play the Black Knights. I personally thought it could be a really good game and that West Virginia would win but certainly not the way it actually happened.

Coach Brown figured that he had a very strong defensive line that he believed could contain the Knight rushing attack which was proven true as the Knights were held to 182 yards on 60 carries for about a 3 yard per carry clip. Several of the Mountaineer underclassmen that saw action on the defensive side of the ball had defended options attacks their entire high school careers and displayed a sound knowledge of what Army was running. What hurt West Virginia as much as anything were the 6 times the Knights actually threw the football completing 4, all for key first downs that kept scoring drives alive. It is easy to see how the Mountaineers would overlook the pass and get caught flat footed when you pass the ball just 6 of 67 offensive plays.

This game started out about as I expected with WVU taking the opening kick and driving 57 yards on 14 plays before the drive stalled at the Army 20-yard line. Unfortunately, the Mountaineers senior placekicker Tyler Sumpter SHANKED a 37-yard field goal attempt and WVU came away empty on that opening drive. After holding the Knights to just 4 yards on 3 plays in their first possession WVU would get the ball back at their own 30 but unfortunately on the 4th play of the drive Mountaineer quarterback Jarrett Doege tossed a brutal interception to Army senior cornerback Javhari Bourdeau who returned it 24 yards to the Mountaineer 46-yard line. This was the first of 2 brutal brain-dead plays by Jarrett Doege that would ultimately result in him being pulled from the game in the 2nd half. Fortunately, the WVU defense again stuffed the Knights on just 8 yards on 4 plays and WVU would take over on their own 38-yard line to begin their 3rd drive of the game. The Mountaineer offense would drive 48 yards on just 7 plays and this time Tyler Sumpter was on the mark from 31 yards and we had a 3-0 WVU lead.

The Black Knights took the ensuing kick and put together their best drive of the game going 74 yards on 14 plays and taking 7:17 off the clock and took a 7-3 lead on a 1 yard run by their talented sophomore tailback Tyhier Tyler. The Mountaineer offense would come right back with a very impressive 12 play 77 yard and took a 10-7 lead on a 5-yard pass from Jarrett Doege to senior wideout T.J. Simmons. After the WVU defense held the Knights to just 13 yards on 6 plays the Mountaineer offense would get the ball back with 2:27 to go in the half with a change to increase their lead before the break however on the 3rd play of the drive at the WVU 29-line Doege dropped back to pass and rumbled around then simply stood there as he was hit by Army junior cornerback Malkelm Morrison and fumbled the ball and the Black Knights recovered at the 7 yard line and 2 plays later tailback Tyhier Tyler ran for a 6 yd TD and instead of leading at the break WVU now found themselves trailing 14-10.

Things got worse at the start of the 2nd half when the Black Knights took the 2nd half kick and proceeded to drive 75 yards on 13 plays to take a commanding 21-10 lead on a 2-yard TD run by tailback Tyhier Tyler. Not only did the Knights score a touchdown, as they often do with that option attack they took 8:00 off the 3rd quarter clock further limiting the Mountaineers chances to comeback.

This next possession was critical for the Mountaineers as if they fell behind 28-10 or even 24-10 it wound have been a monumental lead to overcome in the 2nd half, especially with Coach Neal Browns decision to bench starting quarterback Jarrett Doege in favor of the Senior Transfer from Oklahoma Austin Kendal. Kendal had really not seen any significant action this season after being the starting quarterback the first 9 games in 2019. However, West Virginia took the ensuing kick and Kendal lead the Mountaineers on a critical 80 yard 10 play drive and the EERs got back in the game on a 3-yard TD pass to tight end Mike O'Laughlin and with 3:23 to go in the 3rd quarter it was now a 21-17 game and all WVU needed to do was play sound defense and the rest of the way and find one more touchdown drive and they could win this first bowl game in what hopefully will be a long career for Head Coach Neal Brown.

After both teams traded punts twice WVU took over at their own 35-yard line and Kendal manufactured an 8 play 65-yard drive that ended with a beautiful 20-yard fade pass to Senior T.J. Simmons in the corner of the endzone for a touchdown and with 5:10 to go in the game the Mountaineers had the lead at 24-21. On the ensuing series the nights mounted a 6 play 43-yard drive that stalled at the WVU 22 yard line but Armys freshman kicker Quinn Maretzk missed a 39 yard field goal that would have made it a 1 point game and the Mountaineer defense would stop the black Knights on their final drive intercepting the Knights quarterback Christian Anderson and WVU wound up with a very gratifying comeback victory over Army. It was a great game to watch and great to see coach Neal Browns team end the season on a high note in just his second year at the helm of the West Virginia Program.

I was really happy to see Leddie Brown get enough yards to crack the 1000-yard mark rushing the football ending up with 1010 yard on the season on 199 caries for a sterling 5.1 yards a carry. Despite his Mini Implosion in the first half that resulted in being benched quarterback Jarrett Doege had a pretty decent season throwing for 2587 yards and 14 touchdowns against just 4 interceptions but the real story of this 2020 Mountaineer team was the defense, particularly the defensive line play. Overall WVU finished the season 5th nationally in team defense led by the Stills Brothers.

So now we await the 2nd National Signing Day on February 3rd.

Game Reports for all Games in current Season

Visit The Mountaineer Message Board

This site designed and updated by J.R. Holmes